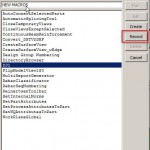 Tekla Structures allows to record whole user activity to macro script, and then you could play it again and again. This allows to save time on some routine. And if we take in case that Tekla Structures developers loves menus, and submenus, and sub-submenus,  and buttons, and… all this stuff. With bunch of parameters, and applying /modifying… so save some clicks would be great idea, and macros really cool thing for this.

To record macro script in Tekla you have to go thought few steps:

After that would be created new file with name which you type with .cs extension in folder which is set as default in Tekla Advanced Options – XS_MACRO_DIRECTORY

So you could find it at that folder, usually path to it could look  something like this:

To change default folder on something more suitable for your company (usually some common network folder) you have to replace path in advanced options. You could find these here:

How to edit Tekla Macro Scripts

Okay, now we got some macros which was recorded and it make something – great! But things which has been generated usually not fully satisfies sophisticated requirements. But we could solve this manually, because result of record – is a text which contains list of actions step by step. So we could modify it with any suitable editor:

In common case, right after record it looks something like this:

At first look it looks a little bit weird. But actually it quite simple to read, especially if you take into account steps which you actually did.

Text of macro contains class which named as Script,  and this class contains method – Run which takes as argument akit object, it will be provided by Tekla instance when you run script in interface.

And these all requirements for scripts acutally – entru point named Run which takes as external dependency – akit object.

Inside this method you could do whatever you want. But by defauld you have to work with received object, which give you access to Tekla UI actions.

For example in script which is listed above we do:

Accordingly we could edit scripts as simple text – add, edit or remove some actions. And because Tekla Structures use as scripting language C# we also could add some variables, make calculation, and even create our own menus and windows.  For example you could look at script from this article (link would be available soon)

How to use Tekla Macro Scripts with Tekla API
How to work with Events in Tekla Structures.

5 thoughts on “How to work with Tekla Structures Macro scripts”